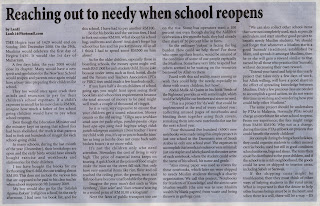 Apart from the activities involving hospital visits, assisting victims of natural disasters, the LKKPP either together with Kami Prihatin (BAKiP) or by itself, will try to embark on the project quite similar as stated by lanh14 in the Harakah 22-25 December 2008 issue above. This project has been discussed in previous meetings several times already and insyAllah, when it does take-off, will assist many more parents of school-going children to lessen their burden. The main huddle to this project is more towards the pick-up points of books contributed rather than the distribution of it. /end.
**************....*************
The Lajnah Kebajikan dan Kemasyarakatan PAS Pusat, today took more than 15 needy and lower income families to Mydin Hypermart in USJ, to assist the families in preparing their children's needs for the coming shool-year 2009. Most of the family were picked from the Titiwangsa Parliamentary constituency in KL, while a few were from outside. 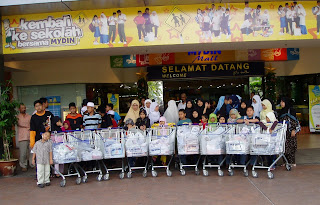 Arriving at Mydin, they were greeted by the Corporate Officers and Executives of the hypermart and were given a small briefing by a Mydin spokesman. The families were then taken into the hypermart where they were given vouchers totaling to RM120 per child, a joint contribution from the LKKPP and Mydin. The families were then treated to lunch at Nasi Kandar Padang Kota, located within the hypermart building. InsyAllah, Harakah will print this story. More pictures at Pictures-Only.
POSTED BY CAKAPAJE
Posted by DR. LO'LO' BT DATO' HJ. MOHAMAD GHAZALI at 6:15 pm