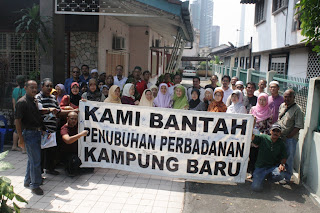 Instead of pushing ahead with plans to develop the area, Kg Baru’s administrators want the government to solve outstanding issues first.

The Malay Agricultural Settlement (MAS) board honorary secretary Shamsuri Suradi warned that the problems were varied and include issuance of land titles and issues to do with Islamic inheritance laws. He predicted that the government would possibly take around 10 years to resolve these.

On 22 February, Najib announced a RM20 million allocation for renovating and upgrading the Kg Baru Jamek Mosque Renovation work would enlarge the prayer hall right up to the fence/boundary and make it a double storey facility to accommodate an increased congregation on Fridays.

Under the new development plans the government decided to form the Kampung Baru Development Corporation, replacing the role currently played by MAS in administering the settlement. The Kg Baru draft Bill was tabled for first reading during the last Parliament’s session in December.

Just before he left for Australia, Najib announced that the development plans were put on hold. It was supposed to be presented for second reading when Parliament resumed this week, but Federal Territory and Urban Well Being Minister Raja Nong Chik Raja Zainal Abidin has postponed it to June.

The fierce opposition to the draft law also resulted in the government’s decision to drop a controversial immunity clause.
The draft law provides immunity from legal action to the corporation and its members when discharging their duties as administrators of Kampung Baru.

Kampung Baru is not the usual standard "Malay Reserve" land. It is a “Malay Settlement” land and is covered by different and special by-laws/regulations. The area covers 90.2 hectares and comprises seven villages with 4,000 landowners. Some of the plots have several owners, due to Islamic inheritance laws.
Kampung Baru lies within the Titiwangsa federal constituency which has always been an Umno fortress which fell to PAS in Election 2008.

Most of the people in Kg Baru are Indonesians. Myanmars and other nationalities are fearful of staying in Kg Baru because of the high numbers of Indonesians there, most of whom have red ICs or working permits.
One resident who did not want to be named said, “We need the area to be cleaned up. Although rubbish is collected by an independent contractor 3 times a week, the area is still messy. Litter is a big problem and rats are a huge nuisance.

“The large numbers of Indonesians renting in the area, and their attitude on hygiene is different from us. Most are there for short-term only, so don't bother about maintaining a clean area”.

According to one owner-occupier, Johan Hamid, “Personally, I can never imagine Kg Baru transformed into a Subang Jaya type of township. The best is to help the owners clean up/spruce up their land/houses and if they want to turn it into a modern apartment or eating outlet, let it be. I mean, even the name is Kg Baru, so it has to be maintained as a kampung with its features such as coconut trees, free of congestion/parking fees.
Although there is only a handful of kampong style houses here, there are busloads of tourists who take photos and eat in the many restaurants here. Many people especially nurses, come to Kg Baru to rent houses / apartments because it is right in the city centre and is close to the General Hospital.

Islamic inheritance laws mean a plot may have several owners. This complicates matters for development as one representative has to liaise with the government. Sometimes, one member may oppose the whole project, altogether.

Many of the owners are elderly and have moved out to stay with their children. Some rent their homes out. Most don't have the resources to improve the premises and the longer they wait, the houses become more dilapidated. Another important issue is land titles as some of the plots have no titles.

There has been a steady objection to Najib’s plans to develop the area. Although many of the land owners no longer live there, they were opposed to the proposed development of Kg Baru with “60 per cent Malays and 40 per cent non-Malay”.

A recent report said that 75 per cent of the land will be developed as commercial property with only 25 per cent residential. Landowners feared having to move out of Kg Baru One person summed it up, “We're really not sure what Najib wants with Kg Baru. Is he listening to someone telling him to grab Kg Baru as it sits next to the Petronas Twin Towers?

"As it is prime land, does he want to develop it for his personal gain whilst under the pretext of "helping" clean up and modernise Kg Baru? If so, he's in for a tough fight as I don't think the people in Kg Baru are that greedy and not all of them are desperate for money.”